What is an Autonomous Vehicle?

An Autonomous Vehicle (AV), also known as the self-driving vehicle, a driverless car or a robot car, is one that is designed to sense its surroundings and move safely between destinations without human interaction. Many self-driving cars are already navigating the streets of California, Arizona, Texas, Washington, Pennsylvania, and many other US states and countries like Canada, China, and Singapore. These driverless vehicles are still at the testing stage and restricted to specific areas.

How do Autonomous Vehicles Work?

Using artificial intelligence (AI) software, in-vehicle technologies, machine learning systems, powerful processors, and sensors, a driverless vehicle can drive itself to a destination in an “autopilot” mode. Autonomous vehicles create and maintain a map of their surroundings based on the sensors situated in different parts of the vehicle. For the smooth working of a driverless vehicle, several systems have work in coordination.

Radar Sensors – Monitor the proximity of vehicles around, to form a 3D map of the current surroundings.

LiDAR –  Light Detection And Ranging sensors help measure distances, lane markings, and detect road edges. The wheels have sensors that detect curbs and closeness to other vehicles when parking. Providing a 360-degree view of the surroundings, LiDAR acts as an eye of the self-driving vehicles.

What are the Benefits of Autonomous Vehicles?

One of the top benefits touted by autonomous vehicle companies is safety. NHTSA estimates that the cause of around 94% of accidents is human error. Will autonomous vehicles remove that risk? In addition to safety, these self-driving vehicles will bring other benefits such as timesaving, increasing the mobility of people who can’t drive and reducing environmental harm.

With the advancement in autonomous vehicle technology, these driverless cars and trucks are estimated to hit the market between 2020 and 2022, with full adoption coming later. Currently, self-driving, autonomous cars have six levels of automation ranging from fully manual to fully autonomous.

The vehicle must meet a set of requirements for each level. The US Department of Transportation’s National Highway Traffic Safety Administration (NHTSA) was the first to define levels. Later, in October 2016, based on the levels defined by NHTSA, new SAE International levels were developed. 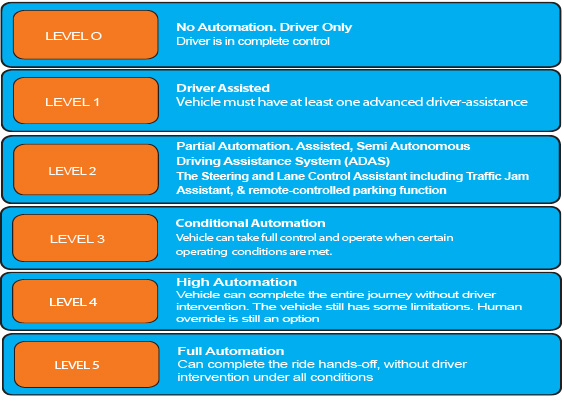 A fully autonomous vehicle is still to hit the road. But there are many companies in the fray to develop a fully autonomous self-driving car that can operate independently. Companies such as Google’s Waymo, Daimler, Aptiv, Volkswagen, BMW, General Motors, Tesla, Toyota, and Apple are working to make this a reality, although it will still take a while before it becomes global.

Autonomous driving technology is attracting all kinds of companies – Startups, Automobile Manufacturers, Original Equipment Manufacturers (OEMs), software companies, map providers, etc. All these are shaping the future of the automotive sector. Just like the internet is continuing to change the world, the autonomous car or the driverless car revolution will impact the global economy in a big way, not yet foreseen. It has to be seen if autonomous vehicles will cause upheaval or present the greatest opportunity.

Sign up to Intellizence, an award-winning AI-powered market intelligence platform, that enables you to discover sales and risk signals in companies as well as stay informed about, emerging industry trends and regulatory changes in the autonomous vehicles space.